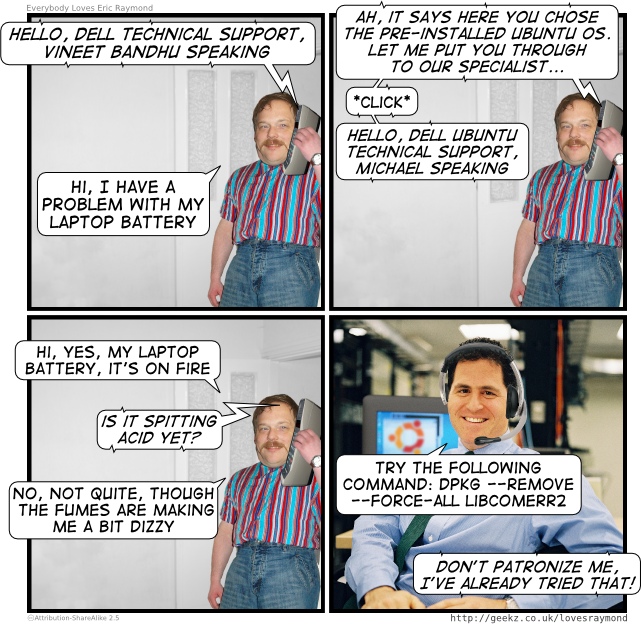 I received this e-mail and thought it might be interesting to the ELER readership. I paraphrase a little:

I am certain you will be surprised to receive this e-mail from me, indeed, I sincerely apologize for the embarrassment this might cause you. However, I wish to state, that it is sincerely necessitated by my present plight and I pray you will readily be of tremendous assistance. I am Mr. JONO BACON, from WOLVERHAMPTON and having consulted with my colleagues and based on the information gathered from the WOLVERHAMPTON chambers of commerce and industry, I have the privilege to request for your assistance to transfer the sum of £5.00 (FIVE ENGLISH POUNDS STERLING) from your account to purchase a ticket for LUG RADIO LIVE 2007.

LUG RADIO LIVE 2007 will commence precisely on the 7th and 8th July 2007 in WOLVERHAMPTON, UNITED KINGDOM which will be hosting AWESOME FOSSY RELATED speakers, only a small percentage of them employed by LARGE FACELESS CORPORATIONS.

I went to Lug Radio Live 2006 and it was great fun. I’m speaking at LRL 2007 about ELER and tribal leadership – come along and say hi. I’ll be the scruffily dressed geek with the laptop.

>normal service will be resumed next week sometime.

So you’ll start updating every three months next week?

When is the next strip coming out?

ohhh i get it!! this months strip is -NOTHING- .. signifying what M$ will eventually become.. John, you’re a genius!

Another Lock of the Week comes through for The Greek. An eeeeasy winner, I hope you all loaded up on it.

John Leach has been bought out by Microsoft!! He’s already adopted a Vista release schedule!

If people want more comics they should goad ESR into saying something stupid.

WTF is with that guy? He used to do so well on his own.

Mmmm… at work today, wearing socks in sandals and my Che RMS shirt. Thank you ELER! Now where is that bloody comic.

Today’s comic: (draw your own pictures)

So this duck walks into the ESR General Store and asks for some duck food. ESR says “No. Now get out of my store.”

The next day the duck comes back. “Got any duck food?” And ESR yells “No you stupid duck. Get out!”

And the next day the duck returns. “Got any duck food?”
ESR is fuming now. He points his finger at the duck and shouts “Look you stupid duck. You see that tree outside? If you come back again asking for duck food I’m going to take you outside and nail your feet to that tree! You got that, Duck?”

Don’t look here, the joke is in ESR’s hand.

Please do a strip about Linus and GPL v3 and/or Con Kolivas.

Please do a strip.

Yes Dr. K, it’s the same Jono Bacon. He’s done a bunch of other music too – worth looking into if you like that genre.

Hey, maybe we can have RMS jump over a shark in the next one?

obWhosThatGuy; who’s the person in the first three panes?

If I’m not mistaken, the guy in the first three panes is ERIC DAMN CAPSLOCK

Eric S Raymond, or “esr” as he appears in various credits roles, blogs, comics, comments, and so on and so forth.

Eric is (correct me everybody if I’m wrong) a programmer interested in the Open Source scene, a believer in the right to bear arms, a husband, the source of much for the material for this comic (albeit unintentionally) and always up for a hug if you just happen to be wearing one of John’s tee shirts.

Eric has in his time contributed a number of interesting concepts and tools for the open source scene; some are as real as I am, and some are even less so:
– a fetchmail kernel patch thing (?? ?? ??) “pop has never been so fast!”
– GUN/Linux (hmmm)
– *something* to do with the programming of Battle of Wesnoth
– some of the prose doctoring qand campaign design for the same game? I think? Maybe?
– “GPL3 is stupid” or “GPL3 is Dead” or “We Don’t Need GPL Any More” or something to that effect
If you can figure out what that last thing is… Read it. You may agree or disagree but it is certainly an interesting read.

And be sure to check out his blog, including all the comments. I’m not really sure what other things esr is responsible for, but four things are certain-ish off the top of my head:
– esr is a prominent or important figure in FOSSland
– esr has grown a moustache
– esr is somehow involved in the Open Source Institute (ever used Joomla?) – he might be the president or ex president or something grand, perhaps
– esr is shrouded in myth and mystery

Sorry I can’t give more information, he’s just another face relevant to some extent in the free software world. Wikipedia might paint a different picture, I dunno. I’m making all this up.

But in any event this is “Everybody Loves Eric Raymond[‘s Blog]” (ELER) and that face about which you enquire is what it’s all about (well, not his face specifically, but you know what I mean)

Now do you want the long answer?

Wait, is it Joomla! that’s OSI approved, or Mambo? Anybody feel free to correct me. Somehow I suddenly have this feeling it’s Mambo….
The code is very similar but the licensing is very, very different ;) ;) ;)

google for smf+joomla (not smf’s fault, nor joomla’s, just an interesting predicament caused by viral licensing)

[…] have been too busy lately for me to make any edits. For the moment I point you at a cartoon strip: elesr, it’s not exactly that funny, but it’s taking the piss out of Dull — I mean Dell, […]